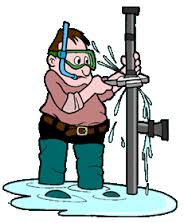 Picture this……it’s a lovely sunny Sunday morning in mid September. You’re lying in bed thinking of the day ahead, how you’re going to spend it with your family and maybe go out for lunch and take a walk. That is until you take a look at your mobile phone !

You see a text message from one of your tenants which was sent the night before at 22.27pm. He is informing you that he thinks the pipes are blocked because the water in the downstairs toilet won’t go down and is coming back out of the toilet. He goes on to ask whether it’s possible for you to go and have a look at it either today or tomorrow.

My first thoughts are those of bemusement…..does he really expect us to go out at that time of night to look at his blocked drain ?! Luckily for us, the message wasn’t received by me until the Sunday morning in any event.

So off we go to the property, having dropped the little man off at my mum’s en route. The tenant answers the door and shows us where it’s been leaking in the downstairs toilet. Rich heads outside and pops up the manhole cover in the back yard and oh yes it’s well and truly blocked ! It’s a good job we didn’t have a heavy night on the alcohol the night before that’s all I can say !!

The drain is absolutely clogged with what can only be politely described as solid human waste ! The three of us are standing there peering down into the drain when Rich disappears off. Five minutes later I’m still standing there with the tenant and we’re beginning to wonder where on earth he’s got to ?? Then he appears with a long stick or rather small tree branch in hand, this is not looking good !

He proceeds to kneel down and use the branch to ‘rod’ the drain in the hope of clearing it. After a good 15 minutes or so he doesn’t seem to be getting very far and I’m starting to talk about leaving it to the experts and trying to coax him into phoning the drain unblocking company. However he’s hearing nothing of it and there’s no way he’s going to be defeated by this !

So out comes the tenant’s bucket which Rich starts filling to the brim with water and throwing down the drain in the hope that this will shift it. After a further 10 minutes or so of alternating between throwing buckets loads of water down there and ‘rodding’ the drain with the tree branch we finally have some movement ! Rich then decides it would be an idea to put some water down the toilet itself and try and flush the waste out from that end. Sure enough this works to some degree, as per the blog photo.

Eventually after many buckets of water and the use of the ‘rod’ he manages to completely clear the drain and all without having to resort to calling the experts and so he’s really pleased with himself ! The tenant’s pretty happy too ! We then return to the rest of our plans for the day.

Whoever said life as a landlord is boring ?!

Mike Rush (White Rose Finance) talks about Commercial Lending – October...
Scroll to top
We use cookies on our website to give you the most relevant experience by remembering your preferences and repeat visits. By clicking “Accept All”, you consent to the use of ALL the cookies. However, you may visit "Cookie Settings" to provide a controlled consent.
Cookie SettingsAccept All
Manage consent